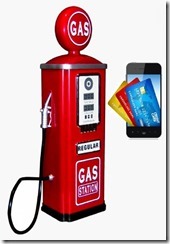 I was recently in a checkout line at a local retailer politely waiting my turn when a very common experience occurred in front of me.   Let me set the scene:

The cashier begins scanning the grocery items of the person in front of me.  The customer walks up to the card reader on the point of sale device and swipes the card. It doesn’t work.

Cashier: Is that a chip card?

Customer: Yes.  Why isn’t it working?

Cashier: You have to wait for me to finish ringing everything up when up have the chip card.

Customer: I liked it better when I could just swipe.  It sped things up a lot.

Cashier: I know it.

(The cashier continues scanning the rest of the groceries until all were accounted for).

Cashier: Its not in all the way.  Push it until it clicks.

Cashier: Ok we just have to wait a few.

Customer: Why would they replace something that was so fast before with something so terribly slow.

Cashier: Ok all set. Go ahead and remove your card.

Customer: I hate these new cards.

Cashier: I know it.

Lets face it.  The customer experience around the move in the United States to EMV or Chip & Pin thus far has been ugly for the average American consumer.  We are a society of near instant gratification.  We have come to expect it.  My friends in Europe and abroad have been used to this type of interaction on payments for some time but here in the States, the SWIPE is firmly encoded into muscle memory.   Its natural.   Its unnatural to do anything else.

At some level most Americans have a passing understanding that the EMV card is more secure and prevents fraud.  That’s about where it ends.  In another interaction I witnessed a man making a purchase  exclaimed, “I hate this Insert card thing.  I know its more secure, but that’s my banks problem”.

In either case I was not about to go into the intricacies of the shift of liability for fraud from the banking institutions  to the merchant. That ultimately it was the grocery store (and not the banks) that would need to worry about the fraud and security if they did not upgrade their point of sale devices to EMV.  I just wanted to buy a gallon of milk, six ears of corn on the cob, and a few packets of gravy dust.  Just how my wife turns that dust into delicious gravy is still a mystery but that is not important here.

For those of you who do not know what an EMV card is, the Wikipedia entry defines it thusly:

EMV is a technical standard for smart payment cards and for payment terminals and automated teller machines that can accept them. EMV cards are smart cards (also called chip cards or IC cards) that store their data on integrated circuits in addition to magnetic stripes (for backward compatibility). These include cards that must be physically inserted (or “dipped”) into a reader and contactless cards that can be read over a short distance using radio-frequency identification (RFID) technology. Payment cards that comply with the EMV standard are often called Chip and PIN or Chip and Signature cards, depending on the authentication methods employed by the card issuer.

EMV stands for Europay, MasterCard, and Visa, the three companies that originally created the standard.

The shift in the underlying technology is definitely a big one.  Its all the stuff I care about as a technology professional.  Its the stuff that the consumer never sees or has an inkling is going on.   I get interested and excited in the fact that the packet payload of a transaction increased significantly going from Non-EMV to EMV even moreso If there is encryption or other security products in the mix on the transaction, increasing the packet size larger.  I love the challenge that those larger packets create on the global payment network, the network sizing and global capacity planning.  I am enthralled by the changes in how those transactions are then routed, checked and authorized. All of these things could / can/ and do contribute to the transaction time per “dip”.  It is these technological equivalents of the arcane black arts, wizardry, rain-dances, and human sacrifices performed in the back-end that capture my attention.  For most however, it all nets out to “Why does this take so long?”

It is in that non-technical, physical, customer service experience that the value of Digital Wallets will finally begin to experience its time of greatest adoption.

Digital Wallets like Apple Pay, Samsung Pay, Google Pay, and other “x-pay” technologies have been out there for awhile.  Their ultimate adoption in the marketplace hasn’t really been all that significant (although it is growing slowly).  Mostly because it has not really hit mainstream yet.   Sure the technology geeks like me have them installed.  So do the Hipsters who want to show their “tech-cred” by getting their No Whip, Half-calf, skinny lattes without putting down their phones and retrieving their wallets (which coincidently are almost always carefully hidden within their perfectly groomed beards like Captain Caveman).

To hit the mainstream, something is going to have to agitate the average consumer so much that it starts to drive the change.   I believe that change is on the horizon.   In fact, I may even know the date.  October 1, 2017.   That date is the deadline where all gas pumps in the United States must become EMV compliant.   There is a good chance the petrol industry will seek a delay (after all – can you imagine the scale of the issue of replacing every gas pump in the country?) .  They were given two extra years to make the conversion but it will likely be a logistical nightmare compounded by the fact that many gas stations are not owned by the gas companies at all, but are franchises owned by local business people.

My personal prediction is that most folks will not want to go through the Stick and Click method at the pumps.  Swiping has become muscle memory for just about every American.  Its so universal here that people use the swipe hand gesture to signal a waiter that they are ready to close out their tab.  Its raw.  Its physical.  Its quick and easy.    Our desire for near instant gratification will push us to something else.   Having your credit card information on your phone, and the ability to “in a swipe like motion” move your phone at the pump for payment will be much easier.   It will feel like what they have always done.   All of technical wizardry that I perform will still take place, but it will do so device to device, behind the scenes.  It may even be just as slow but you will not have to remove your credit card and leave it exposed in a machine while you dart your eyes awkwardly around the gas station while the pump displays the message “DO NOT REMOVE YOUR CARD” for all the world to see.

To some degree this speaks to our innate human resistance to change.  Perhaps even a bit of laziness at a societal level.  But I am sticking to my prediction that these two items will be linked.  I guess in the end only time will tell.

Now if you will excuse me-I am headed off  to enjoy my dinner and the magical gravy juice that was literally produced from dust.